Wiese & Sons is a ranch whose roots run deep within the Hereford breed and as equally rich in history. Occasionally, we like to take a moment and reflect upon the individuals who've come before us. It's because of them and their commitment, decisions, and sacrifices made to the ranch that find ourselves in the position that we're in today. From our humble beginnings to our herd and ranch expansions; we hope to provide you a brief journey through our history to give you a better idea from how it all started to where we are today. 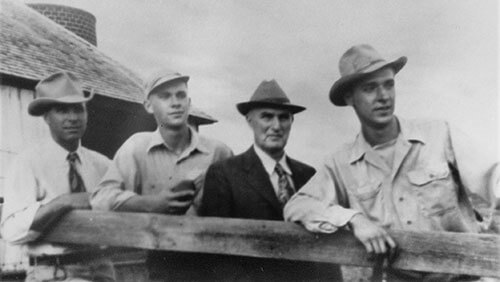 For over a century, five generations have been a part of the Wiese Hereford tradition. Dating back to 1894, Ed Wiese traveled over 33 miles on horse and buggy to purchase his very first Hereford bull right outside of Guthrie Center, IA. He eventually settled in the small town of Manning, IA in 1904 and wasn’t long after that Ed alongside his son Lester began operating under the name Ed Wiese & Son to begin raising registered Hereford cattle in 1912. As the years went on, Lester’s sons, Gene and Sam, joined the operation in 1948 changing the name of the business to Wiese & Sons and continues to operate under the name today. 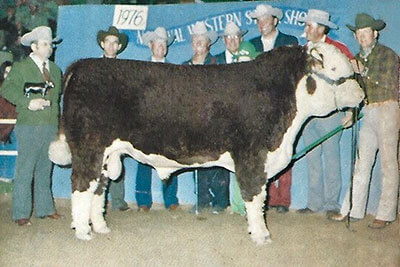 The operation and cow herd began to grow and prosper throughout the 70’s and 80’s. One of the greatest accomplishments in our operation history was exhibiting the grand champion bull, Grand Slam, at the 1976 NWSS. Later that year, Wiese & Sons made one of the most influential purchases in our operation's history with the purchase of the bull, KING TEN. Much of the cow base today can trace back to this line of cattle. Known for his longevity, maternal traits and high carcass quality, KING TEN has made an impact not only in our herd, but much of the beef industry for many years. At the start of the new decade Genes son, Dave, joined the Wiese partnership in 1982 and has played a major role in the success of the cow herd not only in the pastures but also in the show ring throughout the 90’s and early 2000’s. 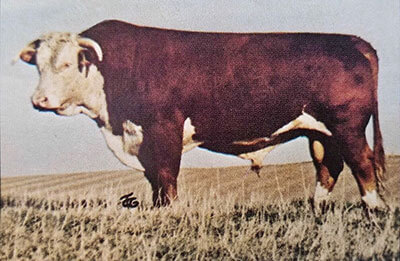 Today, three generations are actively involved with the operation with Gene, Dave and his three sons Chance, Shayne and Trey, all of which joined over the last few years. Although the operation and cow herd has continued to grow and expand, one thing has remained the same and that’s our mission to develop “Good Doin” Hereford cattle with a commitment to preserve the land and natural resources and ensure that the future Wiese generations may continue to thrive for years to come.